"For the first time in human history, diamond has been eclipsed by a new gem with greater Fire, Brilliance, Toughness and Beauty."

The Amora Gem revolution, just now, in front of you eyes! Dear Customers, let us introduce to you the new generation of Amora gems.

Amora gem is a naturally occurring crystal in the proximity of very large stars, where it occurs as stardust. The Amora gem crystal only grows in extremely high temperatures that would quickly vaporize diamond. Due to the incredibly high temperatures, it requires for growth, the natural presence of Amora on Earth is very rare, and only found in small quantities near the Earth's molten core. The lack of availability is perhaps one reason that diamond became the most prized gem on Earth instead of Amora.

Amora gem crystal is older than planet Earth, but was never available on Earth, until now! Much, much rarer than diamond, Amora Gem previously only existed around large carbon rich stars, unavailable to any humans on Earth for over 4 billion years of Earth's history. Now that Amora is grown in a lab by recreating star-like conditions, the total production is a small fraction of the annual mining output of natural diamonds. 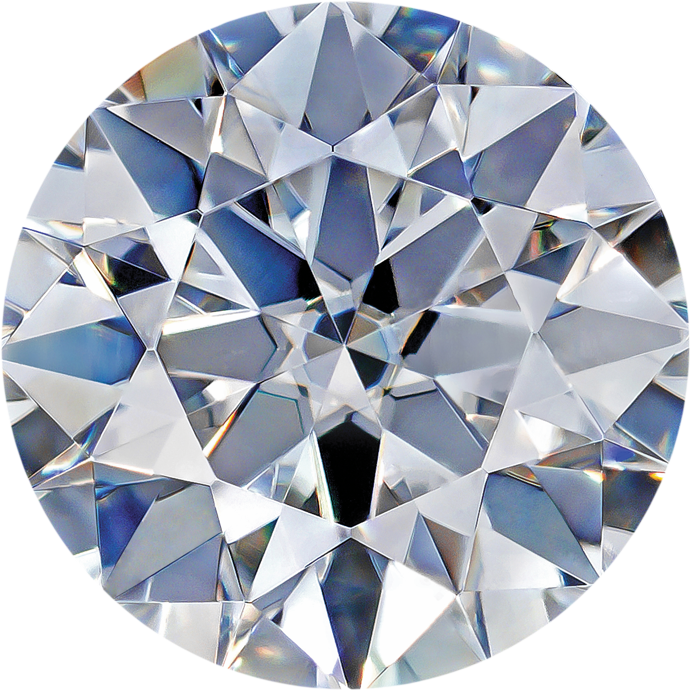 Within a given crystal type, cutting controls 98% of the brilliance. Hearts & Arrows is the absolute premiere cut for a natural diamond, but only 2% or less of natural diamonds are ever cut to this level of optical perfection. Because Amora has much greater brilliance and fire than diamond, the hearts and arrows parameters had to be completely revised and improved for the Amora Gem to account for its superior optics. The arrows are closer to the usual H&A diamond style, but the angles and other parameters were uniquely developed using the world's best modeling software to maximize the fire and brilliance. In an industry first, all Amora Eternity H&As are cut exclusively by the robot. Robotic cutting enables super-human precision and incredible craftsmanship compared to hand cutting, ensuring that the Amora Eternity H&A has unparalleled precision and beauty.

IT IS NOT A DIAMOND OR MOISSANITE. THIS IS AMORA - THE SUPERIOR GEM

Just like most higher-end diamonds, every Amora Gem comes with its own independent grading report where you can find its measurements, actual / diamond alternative weight, color, clarity and other useful information. Amora gem certisive is performed under GIA Diamond grading standards, to advise you of the essential parameters of your own Amora Eternity H&A.

Customer's Review
I have been dying to get my hands on a amora and it was well worth the wait. I received my 1.85ct soaring hearts and arrows today and I was completely blown away by its beauty. its met all of my expectations. I couldnt have been happier choosing this gem over a diamond. It took some convincing to make my fiance see that a diamond isnt always best but once he saw the amora in person he completely agreed. thank you for your excellent customer service and speedy delivery!

The Amora Gem revolution is now here, ready for you to see it, and be seen with it.

Amora Gem is the world’s newest and ultimate gem. It is the first and only lab-grown gem to surpass diamond in brilliance, toughness, fire, rarity and luster, while matching the world's most valuable white diamonds with up to D color, and Internally Flawless clarity. Based on the past 10 years of natural diamond production versus Amora Gem production, the Amora Gem is over one million times rarer than diamond. Amora Gem is composed of 50% carbon and 50% silicon, and only grows in star-like conditions that would vaporize diamond.

64 Facets 64 facet vertical girdle. 4 girdle facets per crown facet, just like H&A natural diamonds. Moissanite, CZ don't facet their girdles due to the cost and time involved, so it's easy to find out if you have a valuable gem, just look at the girdle


AMORA – BY FAR THE MOST BRILLIANT GEM EVER

Refractive index (or R.I.) is a measure of how much light is slowed/bent as it passes through a material. A higher value, or more 'bending power' means greater ability for the gem, with proper cutting, to re-route light back out to the observer rather than passing through the gem to the backside, and thus creating more total brilliance.
A lower value means more light will 'pass through' or create a 'window' or see- through zone, as you tilt the stone or view it less than straight on. Thus, less brilliance because more light is simply escaping out the back of the gem rather than being captured and returned back out the front for you to see as light play and sparkle. Thus, a gem's refractive index is very much a measure of it's expected brilliance (assuming optimal cutting which must use matching angles and symmetry, ala H&A rounds, to maximize it).
Below is a listing of various gem's 'refractive index' or 'potential for brilliance'. The Amora Gem is the most brilliant gem of all, and a vacuuum by comparison has no brilliance (which is why it is the base measure of 1). (Note that when a value is listed as with two values with a hyphen, it means the material is doubly refractive. In other words, the value from light entering the side is different than light entering the top. As you can see, more gems are doubly refractive than not).


IS AMORA GEM THE SAME AS MOISSANITE?

No. The crystal structure of the Amora Gem is distinct, and optically superior, to the crystal structure of Moissanite by Charles and Colvard. The Amora Gem has more brilliance (higher refractive index), and better color (wider optical band gap) than Moissanite. Both Amora Gem and Moissanite by Charles and Colvard are members of the 'Silicon Carbide' family of crystals - there are over 200+ members of this family. Silicon Carbide simply means the crystal is made using silicon and carbon…the internal crystal structure using these elements can vary dramatically, with very different optical, chemical and physical properties as a result.
Think of diamond vs. graphite - both are crystals made of carbon, yet display very different properties. For example, Amora Gem will never tint green the way Moissanite can, and is natively F color, or true colorless. The Amora Gem however, is much harder and more difficult to grow than Moissanite.

With the Amora Eternity, cut to optimal Super Ideal H&A specifications, we are confident in our claim that Amora Eternity is the most beautiful round cut gem in the world.